Language-learning expert Duolingo ( DUOL 7.46% ) crushed Wall Street’s expectations two weeks ago. There were many reasons behind Duolingo’s analyst-stumping performance, but one advantage stood out above the rest.

The company’s official TikTok channel dares to take some risks, and the kids are connecting to that entertaining resource. As the kids say nowadays. Duolingo’s TikTok account is totally based.

Fourth-quarter sales rose 51% year over year to $73 million, while net losses came in at $0.46 per share. Your average analyst would have settled for a loss of $0.68 per share on revenue of $69 million. That’s a stellar performance.

“We’ve done a lot of really good stuff with our mascot in TikTok. It appeals to a lot of people, and with essentially no marketing spend,” said CEO Luis von Ahn. “You know, we’ve gotten over 500 million video views on TikTok. And, as far as I know, we’re probably the brand that gets the most interactions on TikTok of all brands. So, I think that’s another thing that has been pretty, pretty good.”

Duolingo’s TikTok account had zero followers when it started a year ago, one million followers three months ago, and 3.3 million fans today. The company is not boosting its TikTok exposure with paid distribution deals or marketing campaigns. Instead, the company keeps its social media team staffed with people who get the medium and are able to come up with eyeball-magnet videos on a regular basis. Many of its videos get millions of views, and a couple of clips have gone viral with view counts north of 10 million. 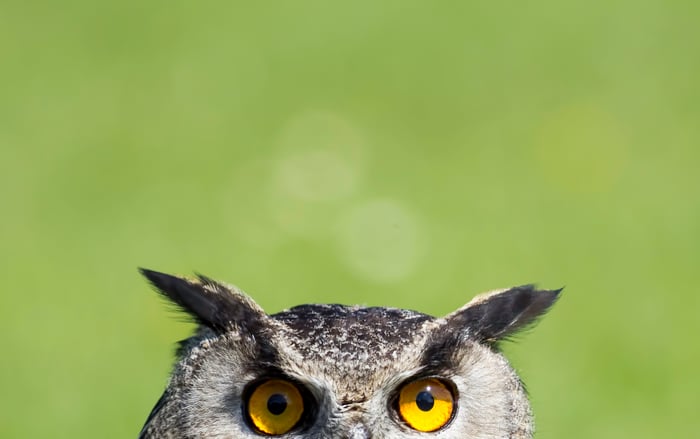 What is Duolingo doing?

The TikTok channel almost always stars the iconic green owl, Duo. The Duolingo mascot gets into all sorts of hijinks, tapping into trendy topics such as Shrek, Taylor Swift’s fervent fanbase, salacious dance moves (in an owl suit), and a series of marriage proposals to singer Dua Lipa.

Many brands wouldn’t be caught dead posting these videos, and a few might want to sue any fan who makes and posts them independently. It’s not solemnly dignified stuff that casts a respectful light on the Duolingo brand.

If anything, the TikTok messaging makes the language-tutoring service look like a fun and lighthearted place, where stuffy textbooks have been replaced by twerking cartoon owls.

And that might just be exactly why it works.

Duolingo isn’t taking itself too seriously in the TikTok medium. This approach wouldn’t work for every brand on the planet, but it goes well with the playful mood of the tutoring app itself. I mean, people make lists of the funniest Duolingo language-training sentences. The Duolingo Stories feature almost always reads like a humorous skit. The company embraced memes where Duo threatens to harm or kidnap you for skipping your language lessons.

This isn’t the first example of funny and effective marketing, of course:

As you can see, it’s not the TikTok channel that makes Duolingo’s message resonate. Instead, it’s the playful delivery, presented to a large audience.

Should everyone copy Duolingo’s strategy?

Again, this probably wouldn’t work for a straight-laced traditionalist like the big banks pr oil companies, but it’s a genius move under the right circumstances. Keeping your finger on the pulse of young consumers with a wink, a tickle, and a dash of genuine humor can be an incredibly effective marketing tool for companies like Duolingo. And, as Dr. Von Ahn noted on the fourth-quarter call, you can make viral TikTok videos on a shoestring budget.

TikTok videos are currently the next best thing to product-driven word-of-mouth marketing. I can only applaud the way Duolingo keeps light reins on its social media staff, and hope that the company will adjust when the conversation moves on from TikTok to whatever game-changing channel comes next.

For now, that channel is so based, you can see it in Duolingo’s financial results.