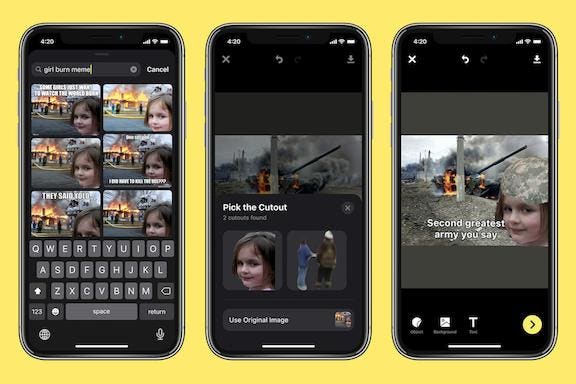 Technology companies proliferated in Ukraine before the war. Now the country’s 250,000 IT workers are looking at small ways to use technology to fight back and undermine Russian propaganda.

On Wednesday, Reface, a face-swap app built by three young Ukrainian entrepreneurs, expects to debut a new app that makes it easy to create and share war-related visual memes. Ukrainians will be the first to receive the new app, called Memomet, which the founders hope will both help fight the information war and also make coping during the Russian assault on Ukraine a little easier.

“We realized the memes helped fight anxiety,” says Anton Volovyk, Reface’s chief operating officer and an alum of the 2021 Forbes 30 Under 30 Europe list. “Humor is one of those areas where we can keep the Ukrainian narrative going.”

The new app is the latest anti-war effort from Kyiv-based Reface. The firm, which has received $5.5 million in seed funding led by Andreessen Horowitz, previously added push notifications informing its 200 million users about the invasion and urging them to stand with Ukraine. It also added the Ukrainian flag and the #StandWithUkraine hashtag to all videos created in the app.

On its own, Memomet is the tiniest thing. But across Ukraine, where technology companies proliferated before the war and where the fast-growing population of IT workers swelled to 250,000, such small efforts, done solo or in conjunction with the country’s volunteer “IT Army,” add up. They’re especially helpful for optics in the ongoing information war and for organizing humanitarian funds and help. Among the projects undertaken by Ukrainian tech companies and workers are an automatically updated Google Doc with the latest information on traffic at border crossings, a new piece of software to look for digital links to Russia and Belarus, and lots of fundraising for both military and humanitarian efforts.

“Ukrainians are really, really good at self-organizing under pressure,” says Igor Zhadanov, chief executive of Odessa-based Readdle, which creates productivity apps. “We had dozens if not hundreds of initiatives within the first 48 hours of the invasion with the IT army as an umbrella to coordinate that. But there is no one person who is the head of the IT Army. Different groups are trying to figure out the maximum impact to fight back.”

After Mykhailo Federov, Ukraine’s Minister of Digital Information, put out a call in the war’s early days for civilians with digital expertise to join the country’s IT Army, Ukrainians responded on a Telegram channel by posting tasks and encouraging members to use distributed denial of service (DDoS) attacks on Russian websites. “DDoS is a nonstop work. We are working to improve it, but it’s not our only activity,” says one of the anonymous administrators of the Telegram group. “For DDoS we have a dedicated team to decide what to attack and what is the priority.”

But for most tech companies and IT workers, fighting back is about creating apps, posting videos and information on social media, increasing awareness among American and European customers and raising money. Groups of volunteer civilians have self-organized with overlapping members and goals. “If you are doing something that helps people and uses technology, you can say you are in the IT army,” says Denys Zhadanov, a board member of Readdle (and Igor’s brother). “It’s very decentralized and chaotic. Some companies are switching into this war mode and some companies are trying to keep the company in business because that’s how we finance our operations and pay salaries and taxes.”

“Ukrainians are really, really good at self-organizing under pressure.”

Over the past eight years since the Maidan Revolution, in which protesters rebelled against and eventually displaced a government with pro-Russian sympathies, Ukraine’s tech industry, largely comprised of IT consulting firms and software developers, has been growing at double-digit annual rates. That’s created a new class of young, well-off workers with deep connections to the West through customers in the United States and Europe.

“There is something very dynamic happening,” says Andreas Flodström, cofounder and CEO of Swedish-Ukrainian firm Beetroot, which does IT consulting and software development. “You are part of the transformation of society, as well as the transformation of the economy and industry, and that goes hand-in-hand with values of freedom and democracy. You can almost feel it in your body when you are there.”

And so the tech workers and their companies have stepped up. In a much publicized campaign in the war’s early days, Internet users flooded Russian restaurant review pages on Google Maps and Russian lifestyle website Afisha.ru with details about the war in Ukraine.

Ukraine IT consultancy and software firm Railsware, similarly, tried to use social media to reach rank-and-file Russian citizens in the early days, undermining Russian government propaganda and spreading word of the devastation caused by Valdimir Putin’s invasion of Ukraine. “Russian propaganda says they have no losses and everything goes well so they shouldn’t worry, and we have hundreds of videos where their tanks and cars are destroyed and their bodies are on the road,” says Sergey Korolev, Railsware’s managing director, who is Ukrainian but has been living in Krakow, Poland, for the past eight years.

But the video campaign geared toward Russians didn’t work (“They just don’t want to know the truth,” he says), so they refocused on sharing information with western customers about how to support Ukraine instead. “This is an informational war,” he says.

Alexander Kholodov, chief executive of Dnipro-based Yalantis, an outsourcing firm with some 500 employees, similarly focused on posting information on LinkedIn and other social media, as well as organizing around $150,000 in donations. “Our messages were targeted to the West,” he says. “Most of our customers are from the U.S., so we have a conversation with them.”

MacPaw, which makes Mac software products, including its flagship CleanMyMac, took multiple approaches. The Kyiv-based company placed banners inside its products with resources on Ukraine that users, including those in Russia, could check out. Within two days, the firm heard from Roskomnadzor, the Russian censorship agency, that MacPaw’s website would be listed among the banned websites in Russia, says MacPaw spokesperson Julia Petryk. “It was before Meta was banned there and Instagram was banned there,” she says. “We were one of the first that was banned there.”

After that, she says, the company decided to cut off all Russian and Belorussian users of MacPaw. “It was our own sanction,” she says. “It’s hypocrisy to provide services to the countries which are aggressors on the Ukrainian land.” All told, 14,500 Russian users and 450 Belorussian ones won’t be able to renew their annual CleanMyMac subscriptions.

Then, the company’s engineers came up with the idea to track if there were any apps running in the background of its customers’ computers of Russian or Belorussian origins. The result: Spybuster, launched in late-March, can be downloaded for free by all Mac users. A second war-time tool, called Together App, lets employees check in on another as they are dispersed across cities and time zones.

SoftServe, a Ukrainian-American outsourcing company, has similarly used technological knowhow for humanitarian purposes. From his longtime home in Lviv, SoftServe engineering manager Taras Kloba created a living document to monitor queues at the border. The document updates regularly based on information submitted via Telegram, and includes detailed information, such as “car queue in kilometers” and “expected waiting time” for all of the border crossings between Ukraine and neighboring countries, excluding Russia.

Kloba, who has lived in Lviv for the last decade, says that he has a responsibility to work extra hard on behalf of his colleagues who have taken up arms to defend Ukraine. “I think that this is something in what I’m experienced, and in what I can help in our country, more than with weapons,” he says. “This is important to have such projects to help my country, and to explain to myself why I sit at home and didn’t join our army.”

SoftServe, which counts major companies like IBM and Cisco as clients, began in Ukraine shortly after the country regained its independence in the early 1990s. The company’s CEO, Chris Baker, who lives in Annapolis, Maryland, says that they have a duty to contribute to the Ukrainian economy as much as possible. “We bring in hard U.S. currency every month,” he says. “Our people working is a big part of keeping the economy working, and keeping the economy working is not only important now but what happens after. We prepaid our taxes, 24 million hryvnia [approximately $812,000], we prepaid those to the Ukrainian government because we know the Treasury needed the funds.”

The funds don’t only help for taxes, notes Railsware’s Korolev, but also help cover the costs of relocating employees and their families to safety. As the war has continued, he says, many workers have set up shop in their basements, where it’s safer, especially when the air raid sirens go off. From his base in Krakow, meanwhile, he’s setting up a volunteer center and searching for medicines to send to Ukraine. “We need to generate more revenue that we can help our employees and their families, and pay taxes in Ukraine and support volunteer efforts,” he says

Beetroot’s Flodström is also already thinking about how to be prepared to rebuild. He’s reshaping the firm’s Beetroot Academy, which has trained more than 4,700 Ukrainians for IT careers since 2014, to work with Ukrainian refugees in Sweden. More than 4 million refugees have fled Ukraine since the war began.

“We cannot solve the whole challenge, but I think we can be one powerful player,” he says. “The tech industry has a very important role now, and will have an even more important one in rebuilding afterwards.”

With additional reporting by Thomas Brewster