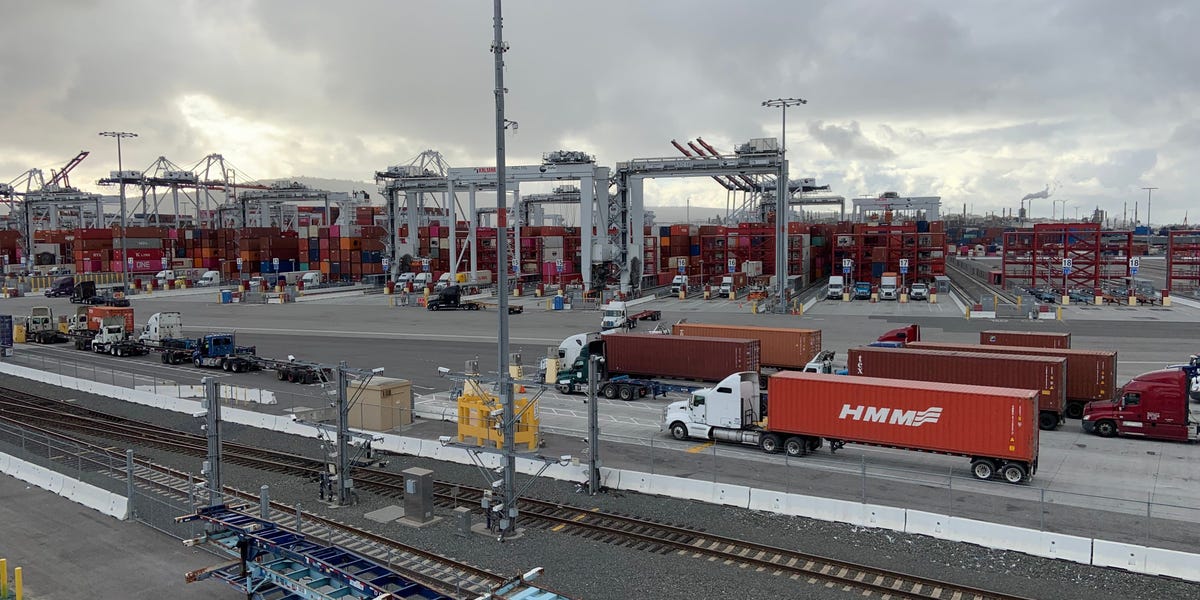 If the congestion at America’s biggest ports could be solved by technology alone, it likely would have happened by now. The hard truth is, there are many problems that have gummed up America’s largest ports.

The line of ships off the coast of San Pedro Bay, now under 50 vessels long for the first time in a long time, shows that small gains are being made.

When a port is the most congested, the pace of unloading ships slows down. And maxed-out container storage and other inland holdups are a big reason the ships end up sitting offshore for weeks.

The solutions that have helped so far haven’t been technological innovations. Matt Schrap, CEO of the Harbor Trucking Association, said the most productive impact so far came from two low-tech moves: allocating extra space for container storage and sending “sweeper” ships to load up with empty containers, without adding to the piles by also dropping off cargo.

Meanwhile, venture-capital money in the freight space focuses on pleasing cargo owners in this ecosystem, since they ultimately pay the bills for all kinds of shipping services. And the largest amount of venture funding has gone to drayage marketplaces focused on getting containers off ships and onto trucks, such as like Next Trucking and Cargomatic, with $124 million and $56 million raised, respectively.

But where port congestion is concerned, systemic improvements are what’s required, according to multiple startup founders who work directly with drayage companies.

Constrained labor, storage space for containers, and a demand for more precision have upped the pressure on all the players inside the ports — but especially the trucking companies and drivers tasked with getting full containers out and empty containers back in. The problem is massive but the solutions are granular.

“I think the problem today that we’re facing is that port operation and drayage is a huge black box and bottleneck for the international supply chain,” Alexandra Griffon, cofounder and CEO of BlueCargo, said at the TPM Tech conference in Long Beach last month.

Startups that actually help the problem as a whole, and give more players visibility inside the “black box” rather than just helping individual shippers get their goods out, stand to make an impact. These are five startups attempting to do just that.

The growth of BlueCargo in the last year paints a vivid picture of the administrative nightmare of trying to get containers out of the Los Angeles/Long Beach Port Complex. BlueCargo helps trucking companies find appointments at port terminals and avoid the late fees exacerbated by congestion.

On top of the back-office work required to check more than a dozen websites — one for each terminal — to book pickup and drop-off appointments, every day an empty container sits outside the port it incurs a charge, even if the trucking companies aren’t able to get appointments to return it. Those charges can easily run into the tens of thousands per container.

BlueCargo’s tech, conceived while cofounders Griffon and Laura Theveniau were students at the University of California, Berkeley, scrapes those websites to make containers and appointment data easier to obtain while creating an automated, digital paper trail for stakeholders to use in their efforts to properly allocate the fees involved.

Griffon’s theory is that if the smallest players in the equation — the drayage trucking firms — operate efficiently, that efficiency will spread to the larger players.

“If you empower the workers and give them a system that works, then you can go upstream and spread that visibility,” she said.

The LA-based startup raised $3 million in one 2018 seed round.

Dray Alliance is a marketplace for drayage trucking services, but it also incorporates some of the chaos-taming tools of BlueCargo, like scraping the port sites for appointment data. The company has been particularly effective in increasing dual transactions — when a trucker drops off an empty container and picks up a full one at the same time.

“The bottleneck and logjam at the ports is due to truckers, port terminals, and other stakeholders coordinating inadequately with analog systems and emails,” Steve Wen, cofounder and CEO of Dray Alliance, said in a statement announcing the company’s December $20 million Series B round.

Wen was named to Forbes’ “30 Under 30” list for enterprise technology this year. The LA-based startup has raised $55 million in four rounds.

SecurSpace is a North Carolina-based startup that helps trucking companies find parking space in an Airbnb-type platform. In the LA-Long Beach Area, space to park containers is particularly scarce because of the sheer number of mostly empty containers that are sitting around the city longer than they usually would.

Making new space for containers is complicated. It often requires permission from local municipalities, so squeezing every ounce of available space that is currently usable for container parking is essential.

SecurSpace raised $1.6 million in venture capital before it was acquired by Envase in October 2020.

Chunker has a similar strategy to SecurSpace, but until recently was more focused on warehouse space. CEO Brad Wright was looking into using Chunker’s parking lots and facilities in Southern California when the state put out a request for companies to manage property that it was temporarily donating to help fight port congestion.

“It’s a strategic move because it makes us a strategic partner with customers much earlier in the process than we would have been if we were doing just warehouses. So we view it as something that’s going to really build both businesses very rapidly,” Wright told Insider.

The state sites include two fairgrounds, a former prison, and two national guard armories. Each site will have the capacity to move full and empty containers.

Some stakeholders have criticized the plan because the sites are farther than ideal from the port complex. But Schrap said Chunker sites are better than nothing, and the continually rising price of industrial real estate near the ports may make them a more attractive option as time goes on.

Chunker raised an undisclosed round in July.

Right now, most trucking firms going in and out of the ports keep track of everything in spreadsheets — appointment times to pick up and drop off containers, drivers assigned to those jobs, and all other essential tasks for a trucking company are more often than not managed in simple software that’s not optimized for the trucking business.

As the processes and problems at the ports get more complex, most trucking companies’ tools to deal with them are holding them back from allocating drivers and equipment as efficiently as possible, according to Michael Mecca, CEO of Port Pro.

“If we want to find bigger solutions for problems inside the ports, we have to try to figure out ways of making the companies that touch the ports run better,” Mecca told Insider.

While legacy software exists, it isn’t cloud-based or accessible on mobile for the most part. Mecca said without modernizing the technology stack of the smallest players on the supply chain — drayage carriers — the high-raising tech startups that target shippers and larger trucking partners can’t reach their potential either. Plus, healthy drayage businesses are essential to every other player in the supply chain.

Software that manages capacity and gives carriers a more complete view of their own operations can help trucking firms avoid perilous financial situations.

With congestion comes fines and fees, and trucking firms can easily get stuck with the bill. “Drayage is high-stakes gambling, and if you don’t have tools you can lose your shirt really easily,” Mecca said.

PortPro has chosen not to take venture-capital funding yet. Mecca bootstrapped the company to 70 employees.