These could include attachable accessories for a fashion world, for example, or paid access to a new part of a world.

The new tools will be available initially to select users of the company’s immersive platform, accessible via VR headsets.

Meta said these types of tools are a key step toward its long-term vision for the ‘metaverse’ where creators can earn a living and people can purchase digital goods, services, and experiences.

However, the company has confirmed it will charge creators fees of up to 47.5 per cent to sell their virtual wares in its metaverse – significantly more than Apple charges developers on its App Store. 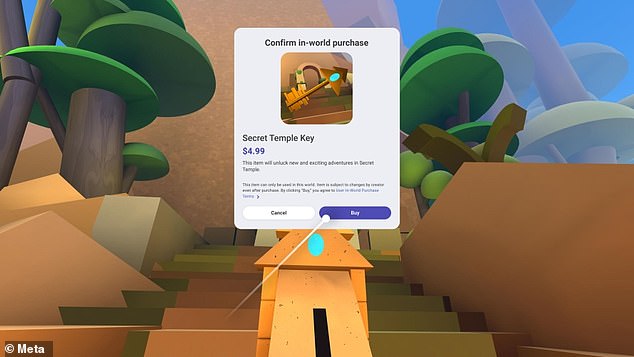 The new tools will allow ‘Horizon Worlds’ creators to charge for in-world purchases, such as paid access to a new part of a world

What is the metaverse?

The ‘metaverse’ is a set of virtual spaces where you can game, work and communicate with other people who aren’t in the same physical space as you.

‘It’s not necessarily about spending more time online — it’s about making the time you do spend online more meaningful.’

While Facebook is leading the charge with the metaverse, it explained that it isn’t a single product one company can build alone.

‘And it won’t be built overnight. Many of these products will only be fully realized in the next 10-15 years.’

‘The metaverse – by nature of its not being limited by physical space – will bring a new level of creativity and open up new opportunities for the next generation of creators and businesses to pursue their passions and create livelihoods,’ said Meta in a blog post.

‘Creators and entrepreneurs will have more freedom to find a business model that works for them.’

Purchasing items in Horizon Worlds is available to people over the age of 18 in the US and Canada, where the virtual reality platform is currently available.

Creators selling items will see a Commerce tab and gizmo when they’re in Create mode that lets them create purchasable items.

Meta charges a platform fee of 30 per cent for sales made on Meta Quest, its virtual reality system, which was formerly known as Oculus.

On top of that, Horizon Worlds, Meta’s metaverse system, will charge 25 per cent of the remainder.

This means Meta will take a cut of up to 47.5 per cent from the sale price, leaving the seller with 52.5 per cent.

‘If a creator sells an item for $1.00, then the Meta Quest Store fee would be $0.30 and the Horizon Platform fee would be $0.17 (25% of the remainder), leaving $0.53 for the Creator before any applicable taxes,’ a Meta spokesperson confirmed to Insider.

‘Over time, we plan to bring Horizon Worlds to more platforms and so the platform fee won’t always be going to Meta.

‘As Horizon Worlds rolls out to more platforms like mobile, we expect those platforms to charge their own fee. The Horizon Worlds fee which is 25 percent of the remainder would be applied after any relevant hardware platform fee has been applied.’

Vivek Sharma, Meta’s VP of Horizon, told The Verge: ‘We think it’s a pretty competitive rate in the market. We believe in the other platforms being able to have their share.’

Meta and its CEO Mark Zuckerberg have previously criticised Apple for charging developers a 30 per cent fee for in-app purchases via the App Store. 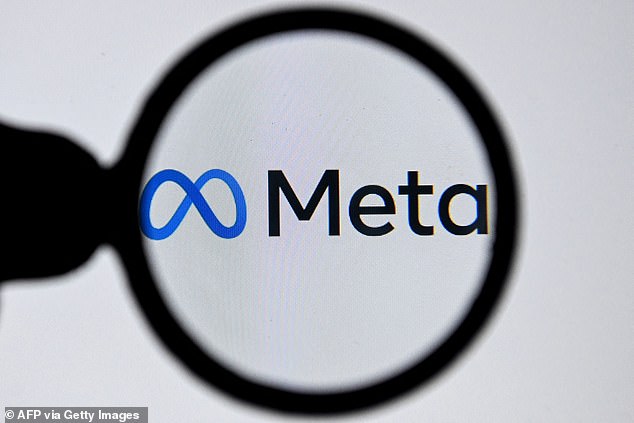 These virtual reality environments aren’t at that level yet, he explained, but lots of people already live much of their lives in the digital world – just on 2D screens

You could soon feel PAIN in the metaverse 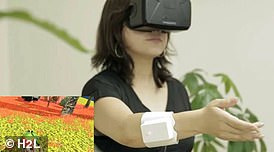 The idea of an armband that can mimic pain in the metaverse may sound like a concept from the latest series of Black Mirror.

But thanks to a Japanese start-up, the creepy device has become a reality.

H2L, a Sony-backed company based in Tokyo, has developed an armband that uses electrical stimulation to deliver physical pain.

It features muscle motion sensors that recognise your hand gestures and position, enabling your avatar in the metaverse to accurately copy your movements.

The social media giant is also testing out a ‘creator bonus’ programme for select Horizon Worlds users in the United States.

Initially, this will reward creators for building worlds that attract the most time spent.

However, in the longer term, Meta plans to use this programme to encourage creators to adopt new tools or features it rolls out.

‘We want there to just be tons of awesome worlds, and in order for that to happen there needs to be a lot of creators who can support themselves and make this their job,’ Chief Executive Mark Zuckerberg said in a conversation with early adopters, held inside Horizon Worlds using avatars.

The Facebook parent company, which changed its name to Meta last year, has invested heavily in virtual and augmented reality to reflect its new bet on the metaverse, a futuristic idea of a network of virtual environments accessed via different devices where users can work, socialise and play.

Zuckerberg claims humanity will move into the metaverse in the future, leaving reality behind for a world of our own creation, that we completely control.

In an interview with tech podcaster Lex Fridman last month, He said there will be a point where virtual worlds are so immersive, and convenient, that we won’t want to leave, and this is the point where it becomes the metaverse.

These virtual reality environments aren’t at that level yet, he explained, but lots of people already live much of their lives in the digital world – just on 2D screens.

‘A lot of people think that the metaverse is about a place, but one definition of this is it’s about a time when basically immersive digital worlds become the primary way that we live our lives and spend our time,’ Zuckerberg told Fridman.

Meta plans to spend the next five to 10 years building an immersive virtual world, including scent, touch and sound to allow people to get lost in VR.

The company is competing with up-and-coming virtual world players where land, buildings, avatars and even names can be bought and sold as non-fungible tokens (NFTs), or blockchain-based virtual assets.

The market for these assets exploded last year, with sales sometimes fetching hundreds of thousands of dollars.

Meta’s Horizon Worlds, an expansive VR social platform, and Horizon Venues, which is focused on virtual events, are early iterations of metaverse-like spaces.

Meta is building the ‘world’s fastest AI SUPERCOMPUTER’: Powerful device that will help Facebook transform into a ‘metaverse’ will be ready by mid-2022

Meta is building the ‘world’s fastest AI supercomputer’ to help Facebook in its transformation into a ‘metaverse’, it has announced today.

The new supercomputer, called the AI Research SuperCluster (RSC), will be the fastest supercomputer in the world when it’s fully built by mid 2022, according to the tech giant.

RSC will pave the way toward building technology for ‘the next major computing platform’ – the metaverse.

Facebook (the company, not the product) renamed itself Meta in October, as part of its long-term project to turn its social media platform into a metaverse.

In the future, the social media platform will be accessible within the metaverse using virtual reality (VR) and augmented reality (AR) headsets and smart glasses.

According to Meta, RSC will help its researchers build better AI models that can work across hundreds of different languages, develop new AR tools and seamlessly analyse text, images and video simultaneously.

This could enable new AI systems that can power real-time voice translations to large groups of people in the metaverse, each speaking a different language, so they can seamlessly collaborate on a research project or play an AR game together.