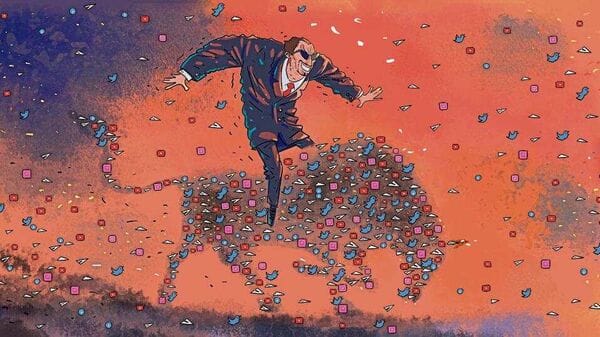 By December 2021, the channel garnered quite a following—of nearly 52,000 subscribers. It recommended stocks to buy and sell, particularly small cap scrips. But there was one problem. The administrators weren’t research analysts. One of them, Himanshu Patel, did a masters in tourism management and had previously worked in a hotel.

Patel, along with other administrators, was using their trading accounts to first buy the shares of certain companies and then recommend it to their subscribers. Next, they sold the shares for a neat profit, India’s market regulator found during an investigation. In an interim order passed on 12 January, the Securities and Exchange Board of India (Sebi) alleged unlawful gains worth ₹2.84 crore. It also advised investors to stay away from such tipsters.

Bullrun2017 was running a classic ‘pump-and-dump’ scheme or one where a stock is manipulated through exaggerated recommendations. Nothing new about this except for the fact that in this case, social media was widely used in talking up penny stocks.

With Sebi cracking the whip, many other Telegram channels dedicated to recommending penny stocks were alarmed. Some of them shifted to other platforms such as Twitter. On 14 January, the admin of one such Telegram channel told its 1,585 subscribers: “Due to Sebi guidelines, I will (be) more active on Twitter …. I will update all stocks, suggestions on Twitter”.

Yet another channel which assures “great returns” with close to 2 lakh subscribers said: “Mandatory disclaimer as required by Sebi. This channel is only for educational purposes. Consult with your financial advisor before investment”.

Interestingly, there is no Sebi guideline that says stock tips and trade suggestions can be given for educational purposes. In any case, most of these channels have little educational material or any discussion on the fundamentals of stocks they recommend.

The rot goes deeper. There are instances where influencers who have considerable following on Instagram, Twitter and Facebook are approached by companies to send out social media posts recommending and endorsing their shares.

All this at a time when more and more Indians are investing in equities. According to data published by the regulator, an average of 26 lakh new demat accounts were opened every month in the year ending March 2022, as against a monthly average of 4 lakh in 2019-20. As of November 2021, the total number of investor accounts stood at 7.7 crore. The new-to-stock markets are easy prey for tipsters peddling in penny stocks.

Mint deep dived into this rabbit hole. The hole runs deep. Here, the lines between what is legal and illegal, ethical and unethical get fairly blurry.

‘Buy-sell’ and ‘stock tips’ are among the most commonly searched terms on every possible social media site. If we type ‘stock tips’ on Twitter, more than a thousand handles show up.

“Social media is full of instances of how certain stocks are sold on behalf of the investment relations teams of the said companies. The stocks are hard sold through webinars, YouTube, WhatsApp, non-stop tweeting and Telegram channels,” Shyam Sekhar, chief ideator and founder of iThought, a Sebi-registered investment advisory firm, said. “These are all virtual marketing tools used to create a sense of FOMO (fear of missing out) among investors. There are many instances where investors have been caught in this trap. They end up investing at peak valuation of manipulated stocks and end up losing as much as 25%-30% of the money invested,” he added.

Mint investigated 12 stock market focused telegram channels to get a sense of how they operate.

“Invest ₹50,000 and get assured returns of ₹1.5 lakh in six months,” pinned messages in many of these groups often state.

Sebi, in the past, has frowned upon many advisors who have promised “assured returns” because this is illegal.

Another standard disclaimer in stock market channels and WhatsApp groups: “We are not Sebi registered investment advisors”. Surprisingly, this hasn’t dented their subscriber base. The admins of many Telegram channels continue to be revered for they have been able to make money in last year’s extended bull run.

“In a bull run, it is easy to make money. The real test of these mushrooming social media stock channels would be in the bear market. These telegram channels are, more often than not, front running stocks at the detriment of their subscribers. These disclaimers are traps to induce investors and avoid being caught in regulatory crosshairs,” Alok Jain, founder of Weekend Investing, another Sebi registered advisory firm, said.

One Telegram channel has over 15,000 subscribers and is run by an individual whose credentials on LinkedIn show that his real expertise lies in ‘search engine optimization’. He worked with a leading stock exchange as a junior level social media manager. On his channel, he recommends small cap stocks.

Yet another channel is run by an individual in Bihar whose experience, before 2017, was solely marketing for retail chains. Before he began giving “super HNI calls” (tips that high networth individuals use), he was the CEO of a departmental store. Currently, his firm is dolling out stock calls to 31,000 subscribers for free. He also has a premium model—for ₹10,000, he would advise “buying the next multi bagger stock”. Stocks that generate returns several times their costs are called multi baggers. These stocks are mostly undervalued but have strong fundamentals.

“Stock recommendations are always followed by emojis of a rocket taking off or fire. These are highly suggestive emojis that indicate a stock is ready for a take-off,” said a senior market analyst who didn’t want to be identified.

Typically, many of these stock calls are always accompanied by an increase in trading volumes.

Here are two examples. Both the stocks were recommended in at least two-three Telegram channels.

Inventure Growth and Securities, a financial services company, was recommended in January this year and the volume of shares traded increased by 3.5 times as compared to the previous month. However, in February, the volume reduced nearly by half.

Lasa Supergenerics, an active pharmaceutical ingredient (API) products company, was recommended in December 2021 and in January this year. The trading volume in December increased almost three times; in January, the volume tripled from the previous month. The volume subsequently reduced almost by half in February.

Mint reached out to both Inventure Growth and Lasa Supergenerics for clarifications. Both did not respond.

Sebi regulations are clear—any investment advice against a fee needs the advisor or the advisory firm to be registered with the regulator. However, some channels have found a way around it. They recommend stocks against a nominal fee towards a social cause. “No one can verify what that social cause is, and whether the money is being used for the said social purpose,” said the market analyst quoted above.

Along with hordes of investors during the pandemic, came a new breed of financial experts. They offer advise on personal finance through the social media. Many of these experts have amassed a massive following on YouTube, Twitter and Instagram. They are popularly known as ‘fin-influencers’ or ‘money-influencers’. At times, these influencers are approached by companies to subtly push their upcoming public offerings or even give their stock prices a boost. The influencers include chartered accountants.

“I know of a well-known chartered accountant who quotes nearly ₹8-10 lakh for recommending stocks,” a market expert who didn’t want to be identified said.

A recent example of a scrip being pushed by influencers is allegedly that of Salasar Techno Engineering Ltd, an infrastructure construction services company. At least three financial experts who have a large following on Twitter raised concerns.

“Please be careful of Salasar….many influencers are being approached to push this in return for ₹25-30K,” Alok Jain of Weekend Investing tweeted on 7 March to his 1.88 lakh followers.

Shravan Venkataraman, a proprietary trader with over 17,000 followers on Twitter, claimed that a digital marketing agency contacted him for a promotional tweet on behalf of the company. “I usually promote any good tool or software, or anything useful for the followers. But this took me by surprise,” he said.

Aditya Kondawar, chief investment officer at JST Investments, a financial services company, said he has been approached quite a few times to recommend the scrip of Salasar.

Mint reached out to Salasar for clarifications multiple times—through the company’s website, and to Shashank Agarwal, the company’s joint managing director, through LinkedIn. The company didn’t respond, neither did Agarwal.

What is the regulator doing?

Barring cautionary advisories, Sebi’s crackdown has hinged on whether the admins of social media channels, or individuals giving out stock tips, have made gains. This, perhaps, gives us a sense of the nature of the beast.

“It is difficult, not just because of the scale of social media, but also because it is often difficult to distinguish between honest or wrong opinion from dishonest manipulation,” said Sandeep Parekh, managing partner, FinSec Law Advisors, a law firm.

“One should not impinge on the freedom of speech for honest but inaccurate opinion. Anyone holding shares may have a view on how his portfolio of companies are likely to do. The forecast may or may not turn out to be true. But that doesn’t automatically mean that the person is dishonest,” he added.

Going ahead, Sebi wants to establish a data lake initiative to improve surveillance. A data lake stores and processes large amounts of structured and unstructured data. This would help the regulator monitor and analyse social media posts to detect potential market manipulations.

Sebi has now formed a special team to carry out frequent search and seizure operations. Since posts on WhatsApp and Telegram channels are encrypted and data is not shared by the big tech companies with Indian regulators, scanning the mobile phones and laptops of suspected market manipulators is crucial. Sebi’s search and seizure team is working closely with consultants to develop a machine learning platform that would help scan social media posts for relevant information.

Stock exchanges, on their part, use web crawler tools to “listen” into social media chatter and posts.

“Exchanges are typically looking for terms such as ‘assured returns’, ‘money will be doubled/ tripled’. Social media posts and conversations with such terms get flagged internally for further action,” said an exchange official who didn’t want to be named.

Meanwhile, the exchanges are proactively cautioning investors to be aware.

On ‘fin-influencers’, much like the rest of the world, Sebi hasn’t firmed up its approach just yet. The only outlier is the Australian Securities and Investments Commission. The Australian regulator, earlier this month, said that paid advertisements—such as sponsored posts or traditional commercials—may constitute a violation of the law. The Australian law specifies that only licenced financial advisers are permitted to recommend financial products.

The Indian regulator has a long road ahead. And it would be interesting to watch how it regulates malpractices without impinging on free speech, a right under the Constitution.