(Bloomberg Opinion) — Three of the grandest names in white-shoe wealth have recently opened their digital doors to the averagely affluent:

Although each of these brands has its own wealth-management pitch, all are essentially retail “robo-advisors” — digital platforms providing automated investments, premised upon semi-bespoke onboarding (risk profile, personal goals, time horizons), offering fees that reflect that absence of human interaction and requiring low opening balances.

So why are these blue-chip bankers — who for generations have fixated on the 1% — stooping to conquer customers with just 0.01% of this wealth?

Various interlocking forces are at work:

TAM of AUM · According to Backend Benchmarking, assets under management (AUM) in the robo-advice market rose from $631 billion in 2019, to $785 billion in 2020. And so, as the total addressable market (TAM) expands, traditional wealth managers are looking enviously at the AUMs of robo-pioneers and FinTech disruptors like Betterment, Fidelity, Schwab, SigFig and Vanguard — to say nothing of blockbuster gambling trading apps like Robinhood, whose 17.3 million monthly active users, as of December 2021, had an AUM of $98 billion.

Simplicity · Whereas high-net-worth clients tend to employ elaborate financial structures across multiple jurisdictions, and rich retirees must juggle pensions, annuities, dividends and estate planning, the above-average working Joe/Joanna simply wants to get in on the market without getting burned. For such modest aspirations, “robo-advice” is not merely better suited to the task but, given its fees, preferable to the client.

Cross-pollination · Once mainstream consumers have signed up to wealth management, how much easier is it to sell them retail banking, loans, mortgages, insurance, e-trading and, who knows, crypto?

#401OKBoomer · Anyone who still thinks Gen Z, Millennials and Generation X have nothing to offer but personal debt and avocado toast should remember the actuarial gravity of an ageing population. As each day passes, more members of Gens X–Z are reaping the fiscal harvest sowed by the richest-ever generation who, born between 1946 and 1964, are now 58 to 76 years old. According to Morgan Stanley, this represents “the largest intergenerational wealth transfer in history, with $30 trillion set to change hands over the next few decades.” As the diner sign used to say: “A milkshake customer today is a steak customer tomorrow.”

All of which poses a puzzle: If wealth management is not just for the wealthy, how best to brand the product?

For many steeped in the traditions of wealth management, WealthTech is an oxymoron: One can either have “high touch” or the common touch. Yet such hidebound thinking increasingly jars with our disrupted, democratic and Direct-To-Consumer present, where digital natives have neither the time nor the personality to schmooze with pinstriped advisors inherited from their (grand)parents, or tipped by a friend.

In this new informality, where word of mouth competes with click of mouse, brands as grand as Goldman Sachs are a double-edged sword: On the one hand, they confer history, stability and deep wells of experience; on the other, they connote expense, exclusivity and consumer intimidation.

Inevitably, the Germans have a word for this: Schwellenangst, which translates literally as “threshold anxiety” and is used metaphorically in the arts sector to describe the apprehension that discourages neophytes from even trying “highbrow” culture like classical music, opera and ballet.

Such Schwellenangst places brass-plaqued bankers in a bind: Do they stick with their legacy branding? Do they create their own indie FinTech knock-off brand? Or do they attempt some form of hybrid diffusion?

Hybridity is the approach taken by JPMorgan and Goldman Sachs, whose offspring cling closely to their parents. (Marcus was named after its bank’s founder, Marcus Goldman, 1821–1904.) It’s notable that the logos for Nutmeg and Marcus don’t just reflect the established typography, they include tethering taglines — though there is an interesting difference in tone between the corporate “a JPMorgan company” and the collaborative “by Goldman Sachs.”

Similarly, their websites reflect only a cautious departure from formality … 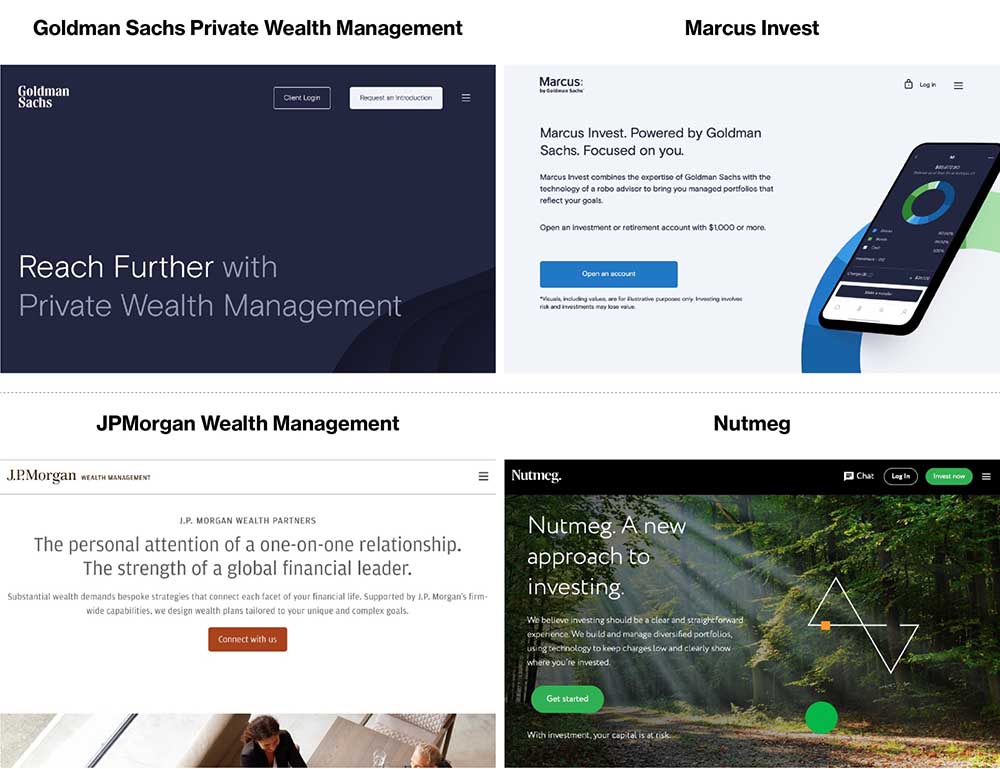 … especially when compared to Nutmeg’s pre-acquisition look and feel:

By contrast, Wealthfront (currently) makes little play of its pending UBS ownership, showcasing instead the echt–bland meet-cute origin story of “when Andy called Dan” and “realized they not only shared a mission — to help democratize access to sophisticated financial advice — they agreed that software could unlock great investing for everyone.” 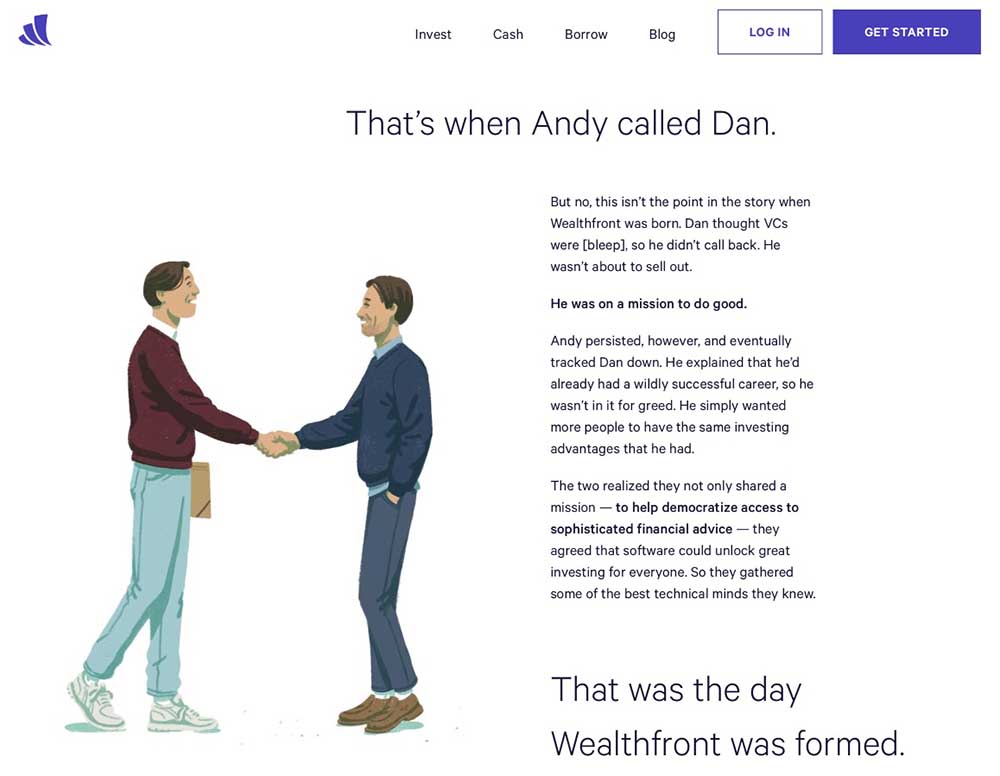 When it comes to tone of voice, however, all three brands exercise a little more freedom: Looking related is one thing, sounding the same is another. Compare the (boldfaced) pitch of Goldman’s Private Wealth Management …

“It is a privilege to advise the world’s most influential people and institutions. Goldman Sachs’ deeply personal approach goes beyond wealth and investment management — it  is a lifelong partnership for growth. Join us for access to expertise, opportunity and each other.”

… to the cakeist approach of Wealthfront:

That said, the disarming frankness of Nutmeg …

“Investing can be difficult. Just ask all those who have tried and failed to beat the market. Fortunately, we have the people, the technology and the portfolios to help.”

… is nothing compared to its pre-acquisition attitude, which may have given JPMorgan a moment of pause: 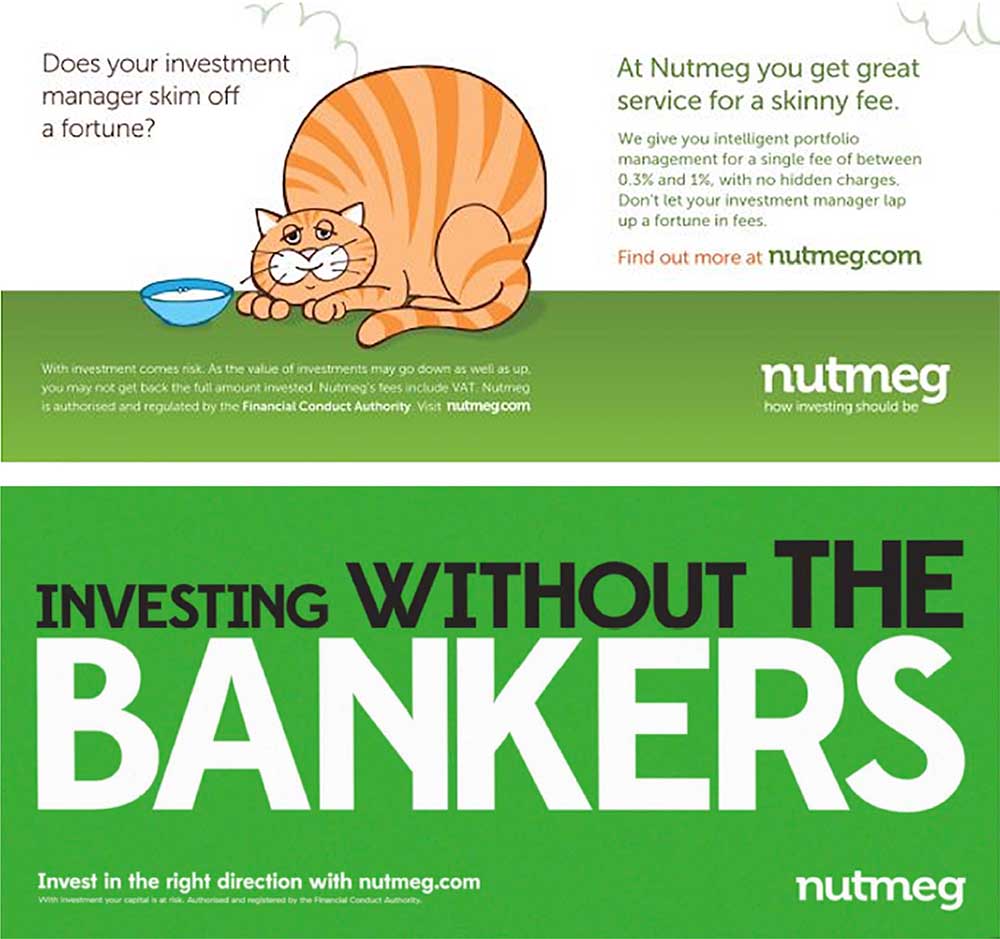 Although we await how UBS might modify Wealthfront’s identity and messaging, curiously none of these robo-brands has yet been folded into its owner’s master brand. Might this be an error?

Uppermost in the anxiety of any premier brand seeking popular approval must be the declasséfication struggles of companies like Stella Artois, Patagonia and, most infamously, Burberry — whose trademark(ed) plaid came close to catastrophe in the 2000s when it was swamped by counterfeiters and a “chavalanche” of apparently undesirable working-class consumers.

To defend against such brand dilution (or even destruction), and discourage market cannibalization, personal luxury goods marketing has developed a range of strategies that monetize masstige while protecting the golden goose:

Affordable Extensions · Leather goods, accessories, eyewear, cosmetics and fragrances that grant hoi polloi an affordable touch / sniff of the real thing. The breakdown of LVMH’s 2021 revenue by business group was: 9% wines and spirits; 10% perfumes and cosmetics; 14% watches and jewelry; 19% selective retailing and other activities; and 48% fashion and leather goods. 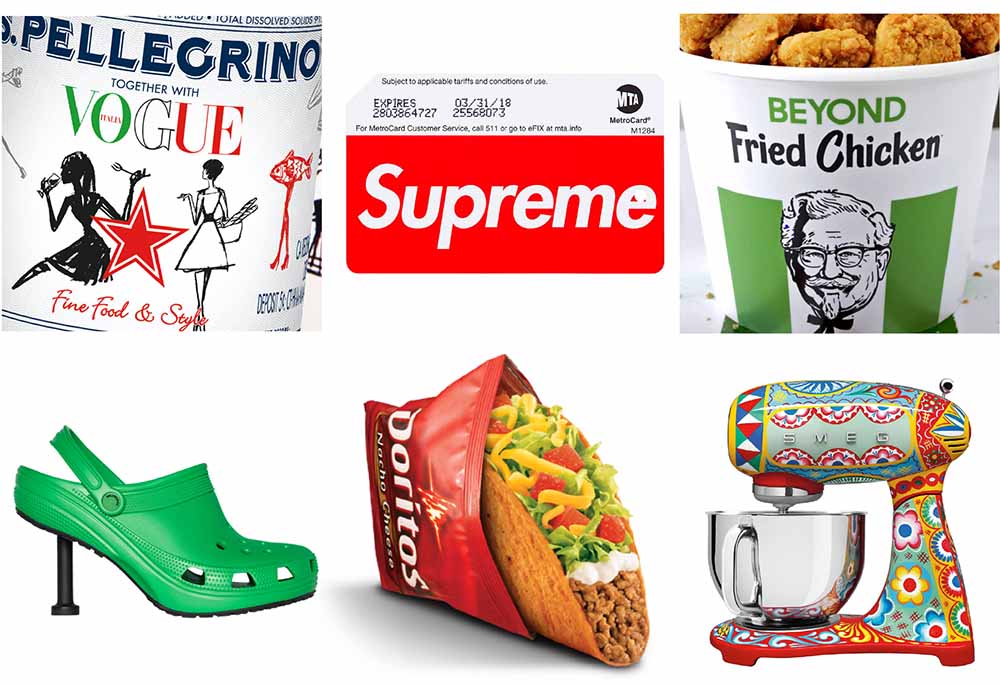 Resale · Where real “real-real” brands (including Gucci, Valentino and Jean Paul Gaultier) take back control of their “pre-loved stock” from vintage stores and online resellers. For example, Encore by Oscar de la Renta “invites you to shop decades of runway fashion, authenticated by our archivists and reconditioned by hand in our atelier.”

Ironically, wealth may be the only thing immune from declasséfication, for cash forms the irreducible core of status, to which “status symbols” are merely distractions or confirmations. It’s noteworthy that while Warren Buffett’s everyman diet of junk food and Coke is central to his popular mythology as the Sage of Omaha — distracting from his $128 billion net worth — the same menu choices by Donald Trump are derided as “weird” and “self-destructive,” thus confirming the opinion that he’s “populist, cheap and maybe too salty for most people’s taste.”

The decision by Goldman Sachs, JPMorgan and UBS to keep their robo-advisors at a distance from their master brands suggests that they are least cognizant of declasséfication — and the risk it poses to their credibility among the 1%. But unless you’re Elon Musk, there is always someone above you on the ladder, and billions on the rungs below. And so instead of sticking with Marcus, Nutmeg and Wealthfront, might their owners haven taken a more bullish approach?

Hierarchy branding is premised on an acceptance of (or acquiescence to) inequality.

At the time of writing, British Airways offered return flights from London to New York for around £520 in economy, £970 in premium, £3,900 in business and £4,600 in first class. Few passengers “turning left” onto a plane feel guilty enough about those crammed into coach to swap seats (luxury is inevitably enhanced by its comparison to economy). Equally, few in the cheap seats have the financial means to fly up front, and those who do are presumably alive to the opportunity costs.

Although some research from 2016 suggests that “the increasing incidence of ‘air rage’ can be understood through the lens of inequality,” most consumers seem to “know their place,” as codified by the 1848 hymn, “All Things Bright and Beautiful”:

The rich man in his castle,
The poor man at his gate,
God made them, high or lowly,
And ordered their estate.

It’s therefore no accident that airlines still use the word “class” to segregate flyers, or that “class” remains useful for mass-market luxury car brands: 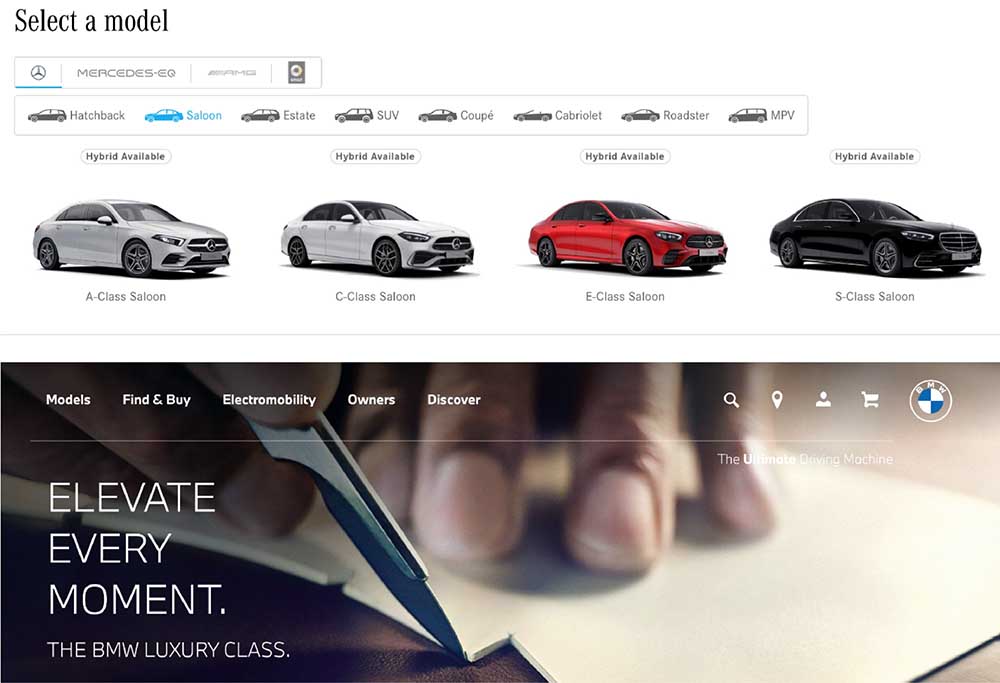 These class divisions are distinct from other branding/price ladders, which nudge consumers gently up the specs or reflect divergent use-case profiles. 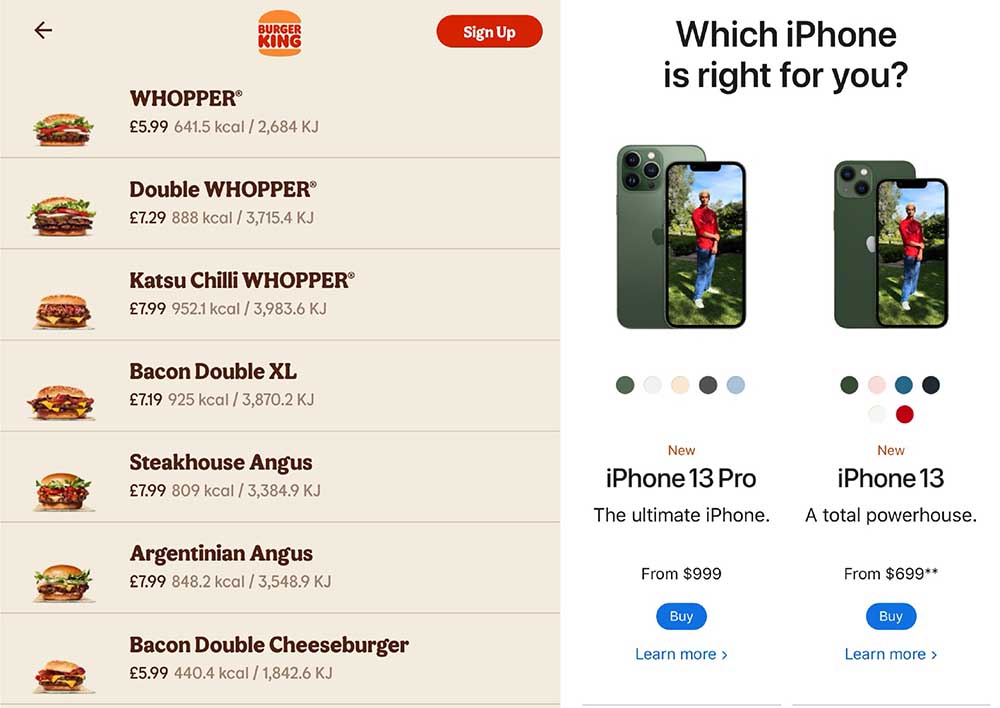 Unlike social class, which is defined at birth, marketing class is based solely on wealth and is, in consequence, fluid. (“An A-class customer today is an S-Class customer tomorrow.”) Such fluidity empowers hierarchy brands to deploy an all-encompassing message across the income chasm, without intimidating the less well-off or disenchanting even the ultra-rich.

Because wealth is (more or less) inconvertible, AmEx neither hides nor disguises its hierarchies. Indeed, its color-coded class system seems to suit everyone: The less affluent feel they are in the same club as the über-wealthy (branding’s “halo effect”), while the rich are either reassured by being primus inter pares, or as indifferent to Blue card holders as they are to passengers in coach.

So confident is American Express in its hierarchy branding, the company even toys with consumers by dangling the existence of an “invitation only” Centurion membership  ($10,000 joining fee + $5,000 a year) while declining to comment on its perks or indeed if the “black card” was inspired by Jerry Seinfeld.

Perhaps it’s no surprise that Goldman Sachs, JPMorgan and UBS chose to go with funky, indie-approximate diffusion branding for their mid-market wealth-management bots. After all, the kids love a friendly name (Marcus!), an approachable font and an amiable block of sales copy — as we know from the unceasing wave of identikit blands flooding our Instagram feed.

But you can’t help feeling they’ve missed a trick.

True wealth management — as distinct from day-trade speculation and crypto hype — is premised on expertise, judgment and time. These are all attributes that legacy banks have in spades, and FinTech startups are working to acquire. Borrowing the branding of the latter to sell the services of the former seems like an odd choice. Not every brand gets to be a hierarchy brand, but those that can be probably should.