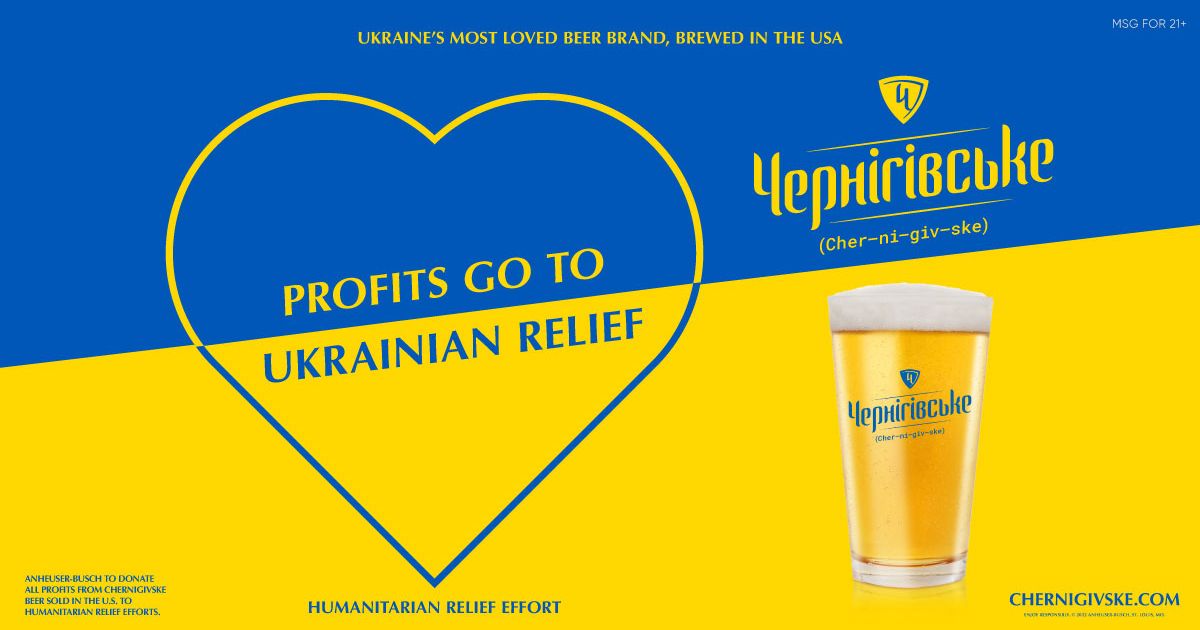 This week’s winners, losers and newsmakers.

Anheuser-Busch InBev: The brewer is taking a Ukrainian beer global as a way to raise money for the war-torn country. It will begin brewing a version of Chernigivske in New Jersey with plans to sell it on draught in Los Angeles, New York, Chicago, Houston and Phoenix beginning in May. Profits will go to the Care Ukraine Crisis Fund.  Chernigivske-inspired beers are also being sold in Canada, Colombia, the U.K. and other European markets. Chernigivske, which is part of the company’s global brand portfolio, is named after the city Chernihiv and has been brewed in Ukraine since 1988.

Mattel: The toymaker surprised analysts and investors by reporting a first-quarter profit after a strong holiday season, despite supply chain snafus. Consumers scooped up items from brands including Barbie and Hot Wheels. Already, Mattel executives said the second quarter is going well as it sells products related to new movies such as “Jurassic World: Dominion” and “Minions: The Rise of Gru.”

Botox: As workers return to office environments and leave the Zoom filters behind, they’re eagerly investing in cosmetic treatments such as Botox to enhance their real-life appearance. Such treatments grew 41% in the U.S. between 2020 and 2021, according to Crain’s New York Business citing data from Aesthetic Society, which tracks such work. Both private practitioners and brands like Botox bar Ever/Body are cashing in on the trend.

Spotify: The music service took a tumble with investors after reporting a spotty outlook. The brand’s projection of 187 million paid subscribers by the end of the second quarter missed analysts’ expectations of 189.4 million. A rise in revenue and a 30% increase in advertising sales did little to assuage investors who sent Spotify shares down 13% on Tuesday.

ESPN: The sports network is entangled in another public dispute with an on-air personality. Sage Steele sued this week, alleging the Disney-owned brand violated her free speech rights and sidelined her over comments she made on the “Uncut With Jay Cutler” podcast, which is not affiliated with ESPN. As summarized by media outlets including NBC News, the comments included Steele criticizing ESPN’s vaccine mandate and also questioning former President Barack Obama’s racial identity. Even if ESPN had the right to discipline the public figure over controversial comments, the fact that it could not handle it internally, without the glare of media coverage, is not a good look.

1-800-Flowers.com: The gifting brand reported some thorny third-quarter results as consumer demand for flowers wilted. Revenue dropped 1% to $469.6 million and the company posted a loss of $23.4 million. Executives said that though Valentine’s Day was “solid,” the rest of the quarter was not as it battles “consumer concerns with rapidly rising inflation and geopolitical unrest.” The weakness came ahead of the record spending expected for Mother’s Day by the National Retail Federation.

Number of the week

2%: The decline in online and in-person U.S. restaurant visits as tracked by NPD Group, compared with a 3% jump in the same quarter a year ago. “The comparison to last year’s gains in the first quarter and several factors in the macro-environment, including higher food and energy prices, contributed to the first quarter’s softness,” stated David Portalatin, NPD Food Industry Advisor and author of Eating Patterns in America.

Quote of the week

Harris Beber was named chief marketing officer of Waze. He had been CMO at Vimeo.

Zappos hired its first chief marketing officer in Ginny McCormick. A marketing veteran with several years in the toy industry, she most recently was marketing director, Worldwide Access Point at Amazon, which owns Zappos.

Shutterstock tapped Jason McClelland as chief marketing officer. He most recently was CMO of Algolia. The photo company also appointed Christopher Skip Wilson as VP, branding marketing. He had led global brand and communications of the commercial business at Peloton.

Real estate company Hines hired Christine Delucchi as senior VP of marketing and communications. She was partner and chief growth officer at Streetsense.