Elon Musk’s agreement to purchase Twitter (TWTR -0.18%) for an estimated $44 billion could bring stockholders a significant cash infusion. Assuming the deal goes through, shareholders will receive $54.20 for each share.

This provides an opportunity for them to look for another news-oriented social media site, and Meta Platforms (FB -2.56%) and Snap (SNAP -1.22%) most closely fit that description. The question is, which of these social media stocks would better serve investors?

Twitter served as a sort of town hall for its users and, in that respect, does not have an exact match. Moreover, not all social media sites focus on news. Pinterest is primarily a site oriented to ideas and marketing, while Bumble and Match Group attract those looking for a mate. And while Digital World Acquisition Corp may be intriguing, the SPAC that seeks to take former President Donald Trump’s Truth Social company public is just too speculative at this point for most investors to consider. 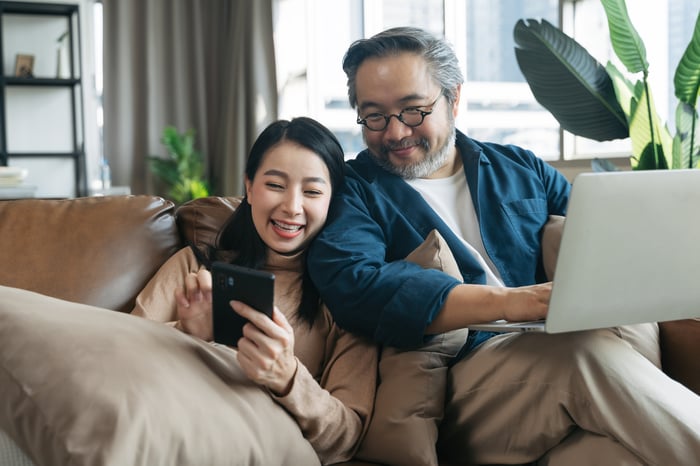 However, Meta’s various platforms serve this purpose. Both Facebook and Instagram allow users to attach news stories and post information. They can also accommodate discussions in their comment sections. While charges of censorship and the inappropriate sharing of user data (i.e. the Cambridge Analytica scandal) have brought Meta negative publicity in this respect, news and politics drive significant engagement.

More recently, Snap has also sought news-oriented viewers. It has pursued partnerships with several news sources, including publications such as The Wall Street Journal and News UK. Such agreements have made it more of a forum for information. This increases the appeal for users 25 and over, and this user base has increased by 25% over the last year.

Moreover, unlike Twitter, both have increased their engagement in the metaverse. Snap has designed its platform around augmented reality (AR). It has developed apps such as Lens Studio and products like Spectacles to give users an AR-related experience.

Meta is so into the metaverse that it changed its name from Facebook to reflect this move. It is the leading producer of virtual reality (VR) goggles with its Oculus headsets, according to IDC. Additionally, it plans to leverage the 2.9 billion users who access one of its platforms daily to create experiences around gaming, education, entertainment, and other social activities.

Still, after their time in lockdown, users have turned back to more offline activities, affecting both companies. Indeed, headwinds continue to persist for Meta Platforms, and these show up increasingly in its revenue numbers. In the first quarter of 2022, Meta reported $28 billion in revenue, an increase of 7% from year-ago levels.

However, with costs rising by 31% over that period, net income fell 21% to $7.5 billion. This is also a dramatic slowdown from 2021, when revenue increased 37% over the previous 12 months while net income climbed 35% over the same period.

Snap outpaced Meta’s revenue growth as its $1.1 billion in Q1 revenue increased by 38% compared with the same quarter one year ago. But similar to Meta, Snap’s revenue rose at a faster pace last year as it increased 64% in 2021.

Nonetheless, Meta still outpaces Snap on the profit front. Snap lost $360 million in the first quarter of 2022, 25% more than in Q1 2021. Rising expenses in both sales and marketing and research and development widened its losses. Another $78 million lost from non-core functions added to the overall total.

Meta stock has also suffered slightly less over the last 12 months, but both stocks are down substantially. Still, both outperformed the S&P 500 until late last year, when they came down along with other tech stocks. Comparing valuations, Snap sells for just under 10 times sales, well under Meta’s price-to-sales (P/S) ratio of four. Hence, in addition to the benefit of turning a profit, Meta sells for a more reasonable earnings multiple. 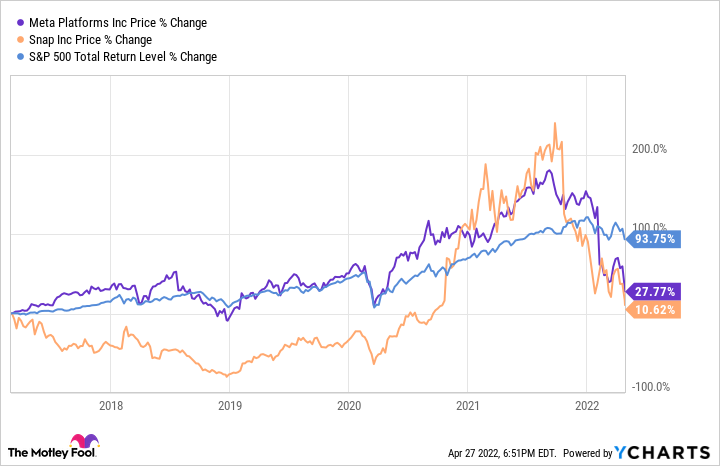 However, larger sizes tend to lead to lower P/S ratios, which is the case with Meta. At a market cap of around $475 billion, it is the largest social media stock. Though Snap has figured out how to compete against Meta, its $45 billion market cap makes it less than one-tenth of Meta’s size.

So, Snap or Meta?

Both Snap and Meta could potentially score outsized gains through their presence in the social media and metaverse spheres. Hence, choosing which company to go with will likely hinge on investment goals. Risk-tolerant investors may prefer Snap due to its faster revenue growth, and its smaller size makes higher percentage growth easier to achieve.

In contrast, value investors looking for more stability might feel more comfortable with Meta. With its dominance in social media and generally rapid financial growth, it could offer more of a boost relative to its cost.