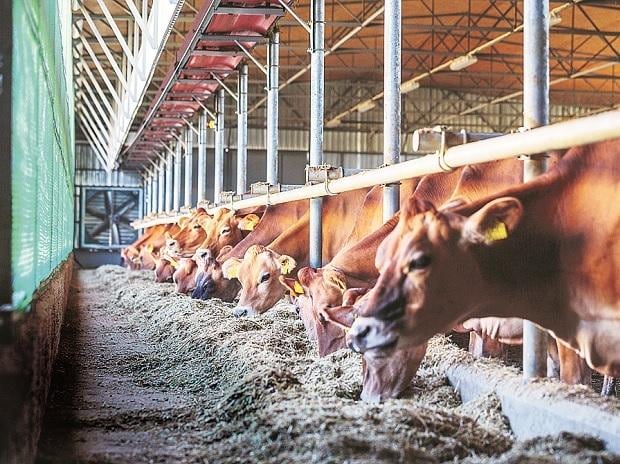 Far away from the national capital, almost touching the Pakistan border are some of the farms that are managed under an end-to-end control by a Startup for strict quality control.

Run by mostly youngsters, this Startup has developed a series of farms and the necessary ecosystem that ensures that the milk drawn from the cows reaches the collection centre faster and without contamination. It sells the natural A2 milk under the brand name ‘DesiGo’ in B2B and B2C domain.

The Startup Bhairaj Organics Private Limited keeps every single step under 24X7 surveillance so that the milk is tracked from the udder till the collection centre and hence is charged at a premium because of the confidence in quality.

Same confidence helped Bhairaj Organics Private Limited as it entered ‘Start Up Grand Challenge 2021’ announced by the Department of Animal Husbandry. And not just they did enter the contest but were declared one of the 12 winners too.

“We have installed cameras everywhere. Each step is monitored carefully. That way, we have ensured not just quality but also can take care of any issue that can potentially disrupt the supply chain,” Bhairaj’s Mahaveer Singh told IANS in Delhi as he came to collect the award.

Not surprisingly. Scores of young entrepreneurs are turning towards the agriculture, dairy and livestock sector and making it a successful enterprise by either adding value to the produce or coming up with solutions that can ease the burden on the small-landed farmer.

This was the second edition of the Department of Animal Husbandry and Dairying with Startup India launching the ‘Animal Husbandry StartUp Grand Challenge 2.0′ — to scout for innovative and commercially viable solutions to address six problems faced by the animal husbandry and dairy sector.

“We had found many startups doing good work among the farmers and wanted to get it to the real needy farmers and livestock community. The challenge offered specific problems and sought home grown solutions,” said an officer from the Department.’Home grown solutions’ is important as there is a lot of costly solution technology available in the market for those who can afford.

Another winner was Ahmedabad’s Prompt Innovations Private Limited, another Startup that provides energy-efficient and sustainable cooling for milk. India is the largest producer of milk but most of the time, taking milk to longer distances is hampered due to lack of cooling facilities.

‘MilkoChill’ of Prompt is an instant milk chiller that helps extend its shelf life that too at the source itself. It majorly helps in avoiding milk spoilage apart from other benefits.

There were more than 150 entries. A three-step evaluation process followed before the winners were declared.

The 12 awardees would get incubation for up to three months, mentor matchmaking, lab facility and even testing facilities, conducting business and investor workshops. There would be virtual Master Classes too.

(Only the headline and picture of this report may have been reworked by the Business Standard staff; the rest of the content is auto-generated from a syndicated feed.)