While early-stage funding in the Indian tech startup ecosystem fell to a 12-month low in May, late-stage inflows dropped below $1 billion for the first time in the past one year, according to data from Tracxn.

“There have been hardly any deals in the last couple of months. The deals whose numbers are being announced now were finalised much earlier. Investors are going back to the drawing board to formulate a strategy on how and where to deploy going forward,” said Anand Lunia, founding partner at venture capital (VC) firm India Quotient.

“Also, founders have not brought their pricing (valuations) down. It is a lot like the real estate market going down, but builders refusing to drop prices and consumers not agreeing to pay that much. So, a lot of homes remain unsold,” he added. Early stage funding had hit the highest of $654 million in July last year, while late-stage funding peaked at $6.5 billion in the same month. Growth-stage deals also have fallen to their lowest in the last 12 months to $258 million in May. The highest during the period was registered in December 2021 at $1.3 billion.

A Moneycontrol analysis of the data showed that the average deal size was least impacted in the early stage – it was $2.52 million in May, compared to $2.75 million in the 12 months up to date.

“Crossover funds, who straddled public and private markets, funded the majority of the growth and late stage deals. As the tide turned in the tech startup sector, they were quick to recalibrate and move away from the private market,” said Siddarth Pai, managing partner at VC firm 3One4 Capital.

“However, early stage funds have raised a lot of money in the past one year or so, with a large amount of angel interest adding to the mix. This will fuel young startups with ample amounts of capital, although it won’t be as buoyant as last year,” he added. 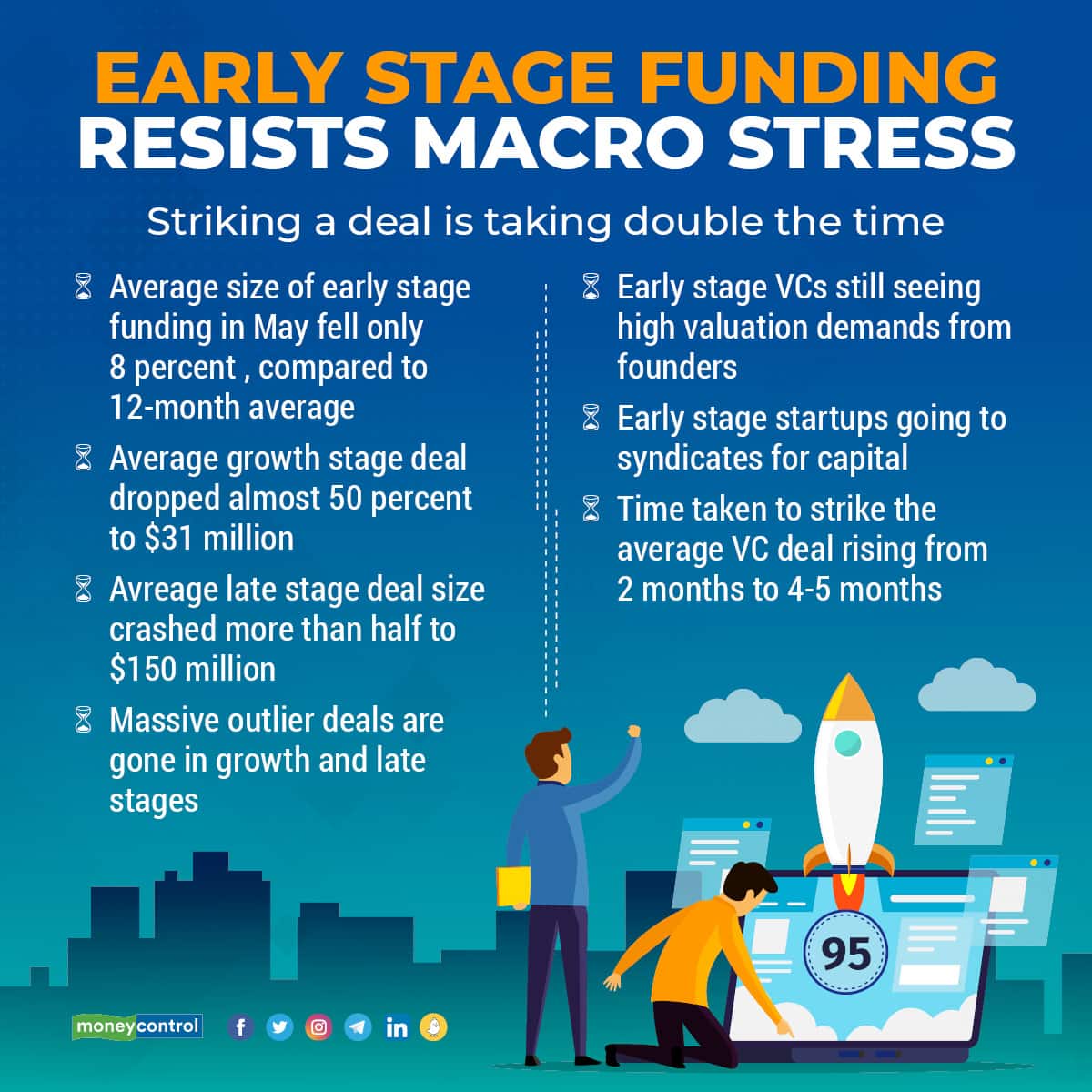 According to Ashish Fafadia, partner at Blume Ventures, the drop in the growth and late stages look more as outlier deals have taken the back seat in the past couple of months. “If you take out the larger mega deal sizes at the growth stage and late stages, the picture will be a lot clearer and one will see that the tapering off is in the 20-30 percent range,” he explained.

“I would say that both the investment volumes and valuations are lower by around 20 percent.  Strong founders with credible biz models are still raising capital and will continue to do so, albeit at saner valuations,” said Fafadia.

For instance, early stage fund 100X.VC, which invested in 41 startups in the previous financial year, is planning to set up its dealmaking. “VC funds like us commit to backing startups over a long term time horizon, it is not like the stock market investing. This financial year’s goal for 100X.VC is to invest Rs 1.25 crore first cheque in 100 startups. We are in an acceleration mode,” said Sanjay Mehta, founder and partner at 100X.VC.