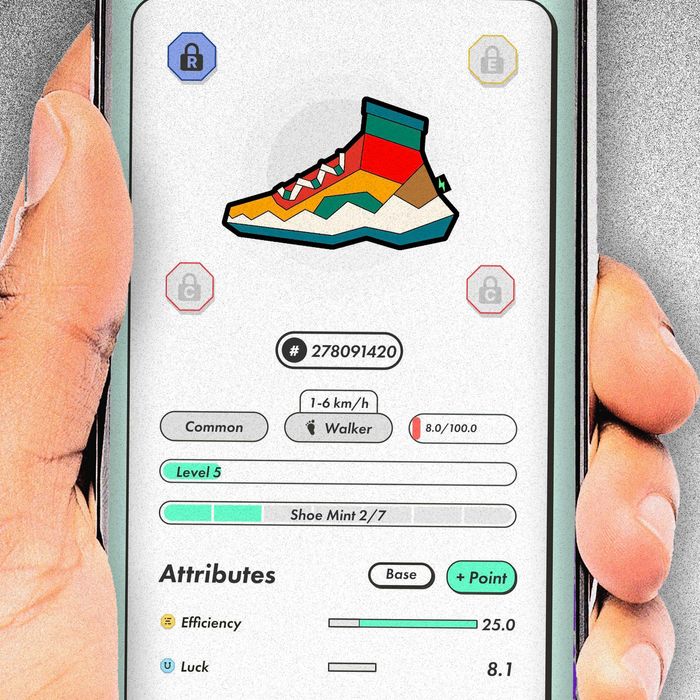 Very few things have made people poorer faster this year than cryptocurrencies. What happened? There was the long boom from the pandemic doldrums of May 2020 to the anything-goes peak of November 2021 that was really a collective froth of many smaller bubbles. In retrospect, they blur into each other a bit, but each discrete craze had its own character, its own particular way of making and losing lots of money. There was the DeFi summer of 2020, when a vaguely finance-y group of companies appeared to make a few billionaires out of nothing more than moving money around. A year after that, there was the summer when NFTs were the thing and people convinced themselves that goofy doodles and cartoons of apes had something to do with high art. Along the way, there were the innumerable joke coins that popped and fizzled in value — remember when Elon Musk hawked dogecoin on Saturday Night Live? One of the most spectacular blowouts was around “play to earn” crypto games, especially the not-very-fun Axie Infinity, which centered around breeding and raising NFT pets. They all spored out of the petri dish known as web3, and they all saw the same final result: A few people got rich, but chances are if you were trying to ride the wave, you got wiped out.

So when a new crypto trend called “move to earn” bubbled up this spring, there was all kinds of enthusiasm for it. (At the time, crypto markets were down but it wasn’t yet clear to everyone that it was the early phase of a crash — which is to say, a lot of people were still greedy.) The first mover in the trend appeared to be an app called Stepn, which paid you to walk. As dumb as it sounds, there was legitimate enthusiasm — some analysts said that, no, really, there was long-term value to it and it was “helping people to motivate themselves to exercise.” I didn’t exactly buy that there would be anything valuable about a blockchain-based system for paying people to walk and run, but it had backing from the venture-funding arm of Binance, the world’s largest crypto exchange, and Sequoia Capital, one of the biggest and most-respected VC firms on Sand Hill Road. Plus, when had a dubious core concept ever been a barrier to crypto success?

Because the move-to-earn bubble was just starting to inflate at such an inopportune moment in larger markets, this phenomenon never reached the insane heights of a Bored Ape NFT or a shiba inu coin and probably never will. But it was a window into the state of the crypto industry at the tail end of its glory days. The appetite in the industry for the project existed despite there being no answers to some key questions: Why would some company in China care about how much I walk? Why would they pay me for it? And why would anyone give them money for this whole project? The most recent crypto bubble has been fueled by nothing if not increasingly absurd promises to make easy money, a way to circumvent an economy that otherwise works you to the bone and makes everything unaffordable anyway. Being paid to walk was too easy — and that was exactly the appeal.

I saw Stepn as my way to experience a part of the world of crypto like most people do: with no research, on the blind impulse of someone who’s looking for an easy way to make money. I read almost nothing about it online and instead chose to learn about it through what was available in the app under a page called “How to play?” It was not very complicated, but at least one of the catches was clear right away. Before you ever start earning money, Stepn requires you to buy a special sneaker-themed NFT. (Recall, NFTs, or non-fungible tokens, are basically just unique digital assets attached to one of the various blockchain systems.) This NFT became your ticket to start earning Stepn’s cryptocurrency, which they call a green satoshi token. There are a few different kinds of NFT sneakers you can buy, depending on how fast you think you’re going to go. Walkers are for people who anticipate going no faster than six kilometers per hour, which is about 3.7 miles per hour, a pretty normal walking speed. That’s the category I selected.

The sneaker NFTs have a kind of geodesic style and come with different “attributes”: efficiency, luck, comfort, resilience — all of which determine how much money you can make. The cheapest one I could find in the marketplace was around five solana — or a bit more than $200 at the time of my purchase. It was more than any actual sneaker I’ve ever paid for in my life. The most expensive ones were hundreds of thousands of dollars, but who knows if those were real prices. The process of doing even this small bit of currency exchange was taxing and arduous: I bought the solana through Coinbase, which informed me that it would take a week for my transaction to clear. After seven days, I purchased a red, yellow, and green high-top that had an efficiency rating of 25, which was the best I could find in that price range.

So on June 9, a clear and humid day, I decided to walk from Park Slope over the Brooklyn Bridge to the New York Magazine offices in Brookfield Place in downtown Manhattan, near the World Trade Center.

Almost immediately, I noticed the app’s tracker was off. Just about every single time I checked the app, it clocked me going faster than my 3.7 mph speed limit — though it was pretty clear to me I was walking slower than that. This is convenient for Stepn, since I wouldn’t make any money going faster than that (there are other sneaker NFTs for those speeds for me to buy).

When I got to the office, I ended my walking session and saw how much green satoshi token I’d earned: zero. On the company’s Discord chat, I asked why that would have been the case, even after I bought the NFT of the sneaker, and a user told me, essentially, that I didn’t do my research. “Read the white paper. You need energy to earn. 1 shoe = 2 energy,” the user, named PumpaSaurusRexx, told me. White papers are kind of a user manual, but without any standardized language or format, so anyone writing one can hide behind jargon like “1 shoe = 2 energy” without having to explain what that means in practical terms. (The rules that I’d read in the app made no mention of energy or prescribed times or any rules around when you could start walking). I told PumpaSaurusRexx that this read as nonsense to me and the nerds closed in. Not only was I supposed to read the white paper, I was supposed to watch a long video of someone explaining all the rules. “Point is,” PumpaSaurusRexx told me, “you’ve started playing a game without understanding even the very basics.”

How humiliating! Turns out that since I only bought one sneaker NFT, I was only entitled to earn money for ten minutes at a time, and I could only start doing so every six hours starting at 3 a.m. So not only do you have to pay hundreds of dollars just to start making money, you can only do it in short, specific windows. All of a sudden, the idea that I was making money doing something I wanted to do anyway vanished. If Stepn was telling me when and how quickly I should move, did that make it basically my boss?

Undaunted, I tried again. On June 13 — the day the crypto markets crashed — I walked around Brooklyn for a good ten minutes or so and earned a total of 8.05 green satoshi tokens — or, based on the market price then, about $4. If I had done that same walk on May 24, when the tokens peaked at $29.10, I would have made $234, or enough to have justified the price of the sneaker NFT. When I tried to cash out the money, the app informed me that I wouldn’t be able to transfer out anything less than ten of the tokens, so I walked again the next morning, bringing in a far smaller haul of 1.9 tokens. Suddenly, my NFT sneakers were in need of repair, and if I wanted to keep earning so much crypto, I would need to spend more tokens for maintenance.

All the catches, the setbacks, the inscrutable jargon and hidden fees — they reminded me of the worst of the finance industry, preying on people by tricking them. At the beginning of my career in business journalism, I covered a niche kind of bonds called structured notes, which tended to be packed with derivatives that tracked the value of some stock but were still sold to retail investors. This was — and probably still is — a market of risky and complicated financial instruments. Part of my job was to read through prospectuses and figure out how they worked: The typical bond would pay, say, double the gains of Apple if the company’s stock rose past a certain point over a period of time. But they could also totally wipe out an investor if the value of the underlying company fell too much — a prospect that turned out to be pretty real. It was common to see some that were so mind-bendingly complicated that there was no way anyone but a professional could understand them. Some included actual calculus equations as a way to describe how they worked. There were all kinds of triggers and catches, hidden fees, and special ways to lose.

At one point, the Securities and Exchange Commission forced banks to simplify how they described these bonds and tell people that they were actually worth less than what they bought them for. Bond traders compared these notes to used cars or bottles of wine, things that lost money when you actually used them. It wasn’t a serious comparison — the usefulness of an investment is in its ability to make money, after all — but I guess it helped them justify ripping people off.

With Stepn, there were the same kinds of gimmicks — except now they do it all without regulatory oversight and they call it a game. If you take a step back, there’s a shocking amount of the crypto universe that seems geared toward actual children — not just games, but the rappers and comedians hawking cartoons that cost as much as a mortgage. “If you get someone young enough, who was a little kid during 2008 or had never really invested in anything before, they might not know the difference between a responsible investment versus what we’re seeing in crypto,” Molly White, a software developer and Wikipedia editor who catalogs the absurdities of cryptoland on her site Web3 Is Going Just Great, told me. What’s amazing about all this is how casually Stepn’s creators have acknowledged how similar the whole enterprise is to a Ponzi scheme, though, of course, they insist they are different and perfectly ethical. (I emailed the company, as well as Sequoia and Binance VC, but got no response.)

Still, if you have the stomach to read Stepn’s Discord channel, it really does look like something weird is going on. People are flooding the board with invitation codes — trying to bring in fresh users with more money — while also complaining about how far the price of the tokens has fallen and how little the NFTs are now worth. Others complain that they’re doing everything right and still can’t make any money. “Most of the time i cant even earn. Getting really frustrating… idk man,” one user wrote.

I still haven’t cashed out my 10.04 green satoshi tokens, now worth a little more than a dollar. And why would I? To give some VC at Sequoia the satisfaction of the transfer fee? I’ll probably let those tokens just sit in that in-game wallet until they’ve gone to zero.